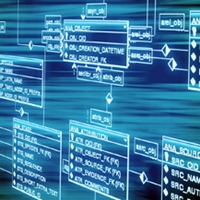 The same record format is used for all types of information, and the relevant fields are completed based on the information available.