Sojourner Truth, an abolitionist and advocate for rights for women, was born as an enslaved person and named Isabella Baumfree. She endured slavery in New York from 1797 to 1828 when she was emancipated based on the law gradually ending slavery in New York. She wrote a biography titled Narrative of Sojourner Truth A Northern Slave. In her biography she identifies her owners, and in this essay we will link her identifications to official records and other documentary evidence in the New York Slavery Records Index. 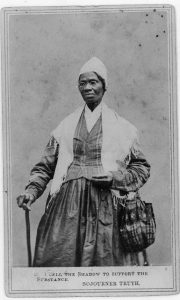 Sojourner Truth dictated her biography based on her memories, and therefore the names of her slave owners do not correspond with the spellings in official records. I therefore rely on a Sojourner Truth Academy essay and other sources that provide reliable leads.

Information about Sojourner Truth’s family and their slave owners has the tag “SJTR” in the NY Slavery records index. You can access these records by selecting any of the search pages and selecting “SJTR” in  the tag menu. No other search settings are needed.

Sojourner Truth was born in 1797 one of many children born to James and Elizabeth Baumfree. Because she was born in 1797, two years before the Act For The Gradual Elimination of Slavery, under the act she was to be “slave for life.” The same status applied to her parents, James Baumfree, who was a slave captured in modern-day Ghana; Elizabeth Baumfree, also known as Mau-Mau Bet, was the daughter of slaves from Guinea.

There is a 1755 Colonial census that shows Colonel Johannis Hardenbergh owning a female slave named Bet. While this cannot be proven definitively, if Isabella Baumfree was the next to the last-born of her thirteen children, then Bet in 1755 might have been a very young slave who grew up to me the mother of thirteen children. However, Bet was a common name for slaves, short for Elizabeth, and the nickname “Mau Mau Bet” might have been given to distinguish her from the older Bet in the 1755 census.

James Baumfree May have been the slave called “Jem” in the 1755 census, owned by Geradus Hardenbergh.

The Baumfree family lived in Esopus NY in an estate owned by Colonel Johannes Hardenbergh.

Our records show Hardenbergh owning 7 slaves in the 1790 US census.

She writes “Among Isabella’s earliest recollections was the removal of her master, Charles Ardinburgh, into his new house, which he had built for a hotel, soon after the decease of his father.”

The Sojourner Truth Academy explains “She was first sold around age 9 when her second master (Charles Hardenbergh) died in 1808. She was sold to John Neely, along with a herd of sheep, for $100. Neely’s wife and family only spoke English and beat Isabella fiercely for the frequent mis-communications. She later said that Neely once whipped her with a bundle of rods, prepared in the embers, and bound together with cords.”

Sojourner Truth writes: “At this memorable time, Isabella was struck off, for the sum of one hundred dollars, to one John Nealy, of Ulster County, New York; and she has an impression that in this sale she was connected with a lot of sheep.”

There is a John Neely in Kingston in Ulster County in the 1810 census. The record does not indicate that he owned any slaves, but if Sojourner Truth was sold to Mr. Schriver when “a long time had not lapsed” then Neely might have sold Truth to Schriver, thereby owning no slaves during 1800 and during 1810.

The New Paltz Town Records include this entry: “March 10 1808 Abraham J Hardenbergh and Margaret Hardenbergh did deliver a Note in writing the purport of it was that their Negro Wench Ejebella whome they had Sold to John Bancks Was delivered of a Negro boy whom the took with her to Said Banks on the twelfth day of December one thousand Eight Hundred and one.”

This is a recollection of another enslaved person, old enough to give birth to a child, with a name similar to Isabella Baumtree. But the record shows the Hardenberghs selling their slaves.

Sojourner Truth writes: “A long time had not elapsed, when a fisherman by the name of Scriver appeared at Mr. Nealy’s, and inquired of Isabel ‘if she would like to go and live with him.’ She eagerly answered ‘Yes,’ and nothing doubting but he was sent in answer to her prayer; and she soon started off with him, walking while he rode; for he had bought her at the suggestion of her father,  paying one hundred and five dollars for her. He also lived in Ulster County, but some five or six miles from Mr. Nealy’s.”

Sojourner Truth writes: “After living with them for about a year and a half, she was sold to one John J. Dumont, for the sum of seventy pounds. This was in 1810. Mr. Dumont lived in the same county as her former masters, in the town of New Paltz, and she remained with him till a short time previous to her emancipation by the State, in 1828.”

“As she advanced in years, an attachment sprung up between herself and a slave named Robert. But his master, an Englishman by the name of Catlin, anxious that no one’s property but his own should be enhanced by the increase of his slaves, forbade Robert’s visits to Isabella, and commanded him to take a wife among his fellow-servants.”

“Why, there was Charles Brodhead promised his slave Ned, that when harvesting was over, he might go and see his wife, who lived some twenty or thirty miles off. So Ned worked early and late, and as soon as the harvest was all in, he claimed the promised boon.”

Charles Broadhead appears in Ulster County in the 1790 and 1810 census. He registers one child born to an enslaved mother, and abandons another.

Sojourner Truth writes: “Mr. Isaac S. Van Wagener then interposed, saying, he had never been in the practice of buying and selling slaves; he did not believe in slavery; but, rather than have Isabella taken back by force, he would buy her services for the balance of the year–for which her master charged twenty dollars, and five in addition for the child. The sum was paid, and her master Dumont departed; but not till he had heard Mr. Van Wagener tell her not to call him master, adding, ‘there is but one master; and he who is your master is my master.’ Isabella inquired what she should call him? He answered, ‘call me Isaac Van Wagener, and my wife is Maria Van Wagener.'”

Sojourner Truth’s last slave owner was Maria Van Wagener. In  1817 New York state had amended the Graduate Emancipation Act to provide that persons who were enslaved before 1799 were not be be “slaves for life” but rather would become free in 1828.